On Biopolitics
An Inquiry into Nature and Language

Prices & shipping based on shipping country 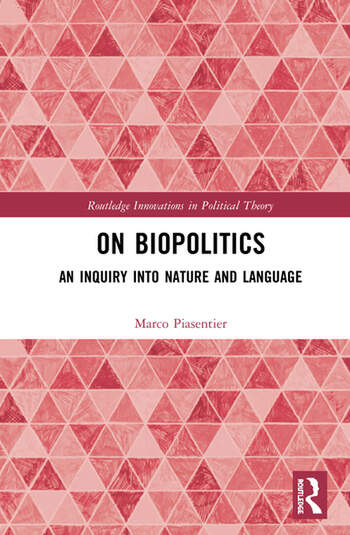 On Biopolitics: An Inquiry into Nature and Language

Routledge & CRC Press eBooks are available through VitalSource. The free VitalSource Bookshelf® application allows you to access to your eBooks whenever and wherever you choose.

Most VitalSource eBooks are available in a reflowable EPUB format which allows you to resize text to suit you and enables other accessibility features. Where the content of the eBook requires a specific layout, or contains maths or other special characters, the eBook will be available in PDF (PBK) format, which cannot be reflowed. For both formats the functionality available will depend on how you access the ebook (via Bookshelf Online in your browser or via the Bookshelf app on your PC or mobile device).

In On Biopolitics, Marco Piasentier discusses one of the most persistent questions in biopolitical theory – the divide between nature and language – and attempts to redraw the conceptual map which has traditionally defined the permissible paths to address this question.

Taking his cue from Foucault’s exhortation to think philologically and biologically, Piasentier traverses the main theoretical and methodological frameworks which have informed the biopolitical debate on nature and language, biology and politics. Biopolitical theory becomes the center of gravity for an investigation encompassing diverse philosophical models, from the Heideggerian linguistic turn to post-Darwinian naturalism. The divide between traditions is not proof of an impossible encounter, but constitutes the site for a new conceptual topography. Working in this interdisciplinary space, Piasentier puts into question the command of language and the ends of nature: two vestiges of a ‘human, all too human’ worldview that preclude the possibility of thinking philologically and biologically about biopolitics.

On Biopolitics: An Inquiry into Nature and Language

is essential reading for humanities and social sciences scholars with an interest in moving beyond debates about nature and language.

1. The Command of Language

2. Is the Human Being a Living Creature?

3. The Death of Bartleby and the Paradise of Language

4. Erring According to Nature

5. The Blowing of the Wind and Natural Selection

6. The Ends of Nature

Marco Piasentier is a Research Fellow at the University of Jyväskylä, Finland, and at the Centre for Critical Thought, University of Kent, UK.

'What is the specific threshold between language and life? And how does modern biopolitics re-inscribe this threshold in multiple ambiguous relations to the traditional concept and contemporary scientific discourses of the "human"? In On Biopolitics: An Inquiry into Nature and Language, Marco Piasentier develops a groundbreaking critical analysis of these questions in close dialogue with contemporary and recent philosophy, including Agamben, Foucault, Heidegger, Nietzsche, and Dennett. While central positions of recent philosophy have rejected Aristotle's understanding of the human being as the animal having language by invoking a radically non-biological understanding of linguistic life, Piasentier argues that this strategy nevertheless exhibits a residual anthropocentrism that fails to reckon with the deep ethical and political problems inscribed within contemporary claims to biopolitical normativity and power. By contrast, a close examination of the problems of explanation in contemporary evolutionary theory exposes the possibility of a new conception of biological normativity and purpose capable of unsettling the privilege of these claims and their power over our self- understanding. In the far-ranging and insightful analysis, Piasentier rises to the contemporary challenge of thinking a linguistic life that is without any end beyond itself.'

'An exceptional book that employs the notion of biopolitics in order to address the most pressing problem in European philosophy today: the relation between the natural sciences and the human sciences, the naturalistic and the transcendental, an opposition which here undergoes an expert deconstruction, with far-reaching consequences for our conception of the human being, the contemporary political situation, and the future of both.'

Michael Lewis, Lecturer in Philosophy, University of Newcastle upon Tyne

'Piasentier's book studies the ontological assumptions hidden behind some influential conceptions of nature and language, with an eye to the effects they have on the field of political theory. He uses a variety of thinkers across different traditions of thought. The result is a thoughtful and original analysis that questions many of our philosophical certainties.'

'In this searching analysis, Piasentier shows how biopolitics must expose the discursive construction of life without deifying meaning, just as it must uncover the forces animating discourse without mythologizing life. By bringing post-Nietzschean critical theory into dialogue with post-Darwinian naturalism, Piasentier's work opens up the prospect of a critical naturalism.'

This book is included in the following series:

The country you have selected will result in the following:

This will help us determine what currency and product offerings to display.