Prices & shipping based on shipping country 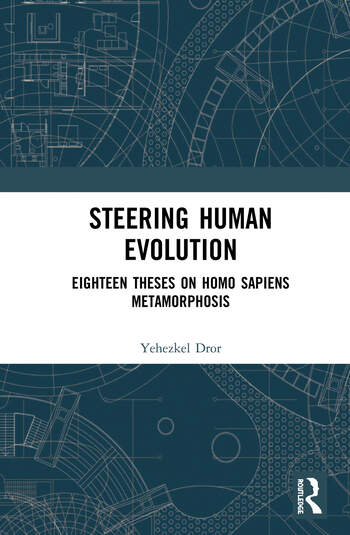 Routledge & CRC Press eBooks are available through VitalSource. The free VitalSource Bookshelf® application allows you to access to your eBooks whenever and wherever you choose.

Most VitalSource eBooks are available in a reflowable EPUB format which allows you to resize text to suit you and enables other accessibility features. Where the content of the eBook requires a specific layout, or contains maths or other special characters, the eBook will be available in PDF (PBK) format, which cannot be reflowed. For both formats the functionality available will depend on how you access the ebook (via Bookshelf Online in your browser or via the Bookshelf app on your PC or mobile device).

Humanity must steer its evolution.

As human knowledge moves a step ahead of Darwin’s theories, this book presents the emergence of human-made meta-evolution shaping our alternative futures. This novel process poses fateful challenges to humanity, which require regulation of emerging science and technology which may endanger the future of our species. However, to do so successfully, a novel ‘humanity-craft’ has to be developed; main ideologies and institutions need redesign; national sovereignty has to be limited; a decisive global regime becomes essential; some revaluation of widely accepted norms becomes essential; and a novel type of political leader, based on merit in addition to public support, is urgently needed.

Taking into account the strength of nationalism and vested interests, it may well be that only catastrophes will teach humanity to metamorphose into a novel epoch without too high transition costs. But initial steps, such as United Nation reforms, are urgent in order to contain calamities and may soon become feasible.

Being both interdisciplinary and based on personal experience of the author, this book adds up to a novel paradigm on steering human evolution. It will be of great interest to scholars and researchers of modern history, evolution sciences, future studies, political science, philosophy of action, and science and technology. It will also be of wide appeal to the general reader anxious about the future of life on Earth. Comments on the Corona pandemic add to the book’s concrete significance.

Yehezkel Dror, a contemplative policy scientist, was born in 1928 and has lived in Israel since 1938. He holds a BA and Magister Juris from Hebrew University, and an LLM and SJD from Harvard University. He is emeritus professor of political science and public administration at the Hebrew University of Jerusalem. He won the Israel Prize in 2005 and has been an adviser to Israeli prime ministers. The founding president of Jewish People Policy Institute, he also serves as an international consultant on policy planning and has been a mentor to senior political leaders.

is the author of the books Public Policymaking Reexamined, Capacities to Govern, Crazy States, Israeli Statecraft and For Rulers. He is also Honorary Member, Club of Rome; Emeritus Fellow, World Academy of Art and Science; and Member, European Academy of Sciences and Arts.

The country you have selected will result in the following:

This will help us determine what currency and product offerings to display.